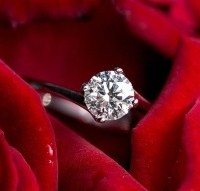 I always smile when I think of Valentine's Day.  Especially Valentine's Day 1994.  My boyfriend of almost two years at the time – Keith – was running late to come to my house for a nice Valentine's Day dinner and exchanging cards/gifts.  He sells real estate for a living, and due to the nature of that business, his estimated time of arrival is often very different from the time he actually arrives 🙂  When he realized he was going to be quite late on Valentine's evening, he thought "do I stop and buy a V-day card and make myself even later when Sara is already in a snit … or … maybe I can buy myself a get-out-of-jail-free card by simply proposing to her."

Keith chose the second option!  He proposed without a ring that night, but I didn't care.  The ring came later.  I was just thrilled that I was going to get to spend the rest of my life with my best friend.  It's funny, nowadays he spoils me with lots of candy and cards on Valentine's Day.  If he had done that on Feb. 14th, 1994, who knows if our paths in life would've turned out the same?  I'm just happy he was running late that night 😉

Mila Is This Week’s Kid of the Week