Do you know your way to Festy-land?

I live downtown, about seven blocks east of the Capitol with my partner, Kim, and our two dogs Augie and Pip.

One of our favorite things about living where we do is enjoying all of the neighborhood festivals that run almost constantly during the “outdoors months.” There are so many of them that the Williamson-Marquette neighborhood has a nickname: Festyland. From June through September, there’s almost always a local festival going on or coming up soon, with lots of good food and live music, in the parks and on the streets around the neighborhood. This past week and weekend it was Fete de Marquette. In June it was the Waterfront Festival. Still to come, Atwood Fest, the Orton Park Festival, and the Willy Street Fair. There’s even an app for that! Check it out here for Android and here for Apple.

Adding to the festive nature of Festyland are the McPike Park Sessions (several nights of free music at McPike Park in June and August), and King Street Live, filling King Street with free live music over several Friday nights throughout the Summer.

The photo is with friends at Waterfront Festival last month. 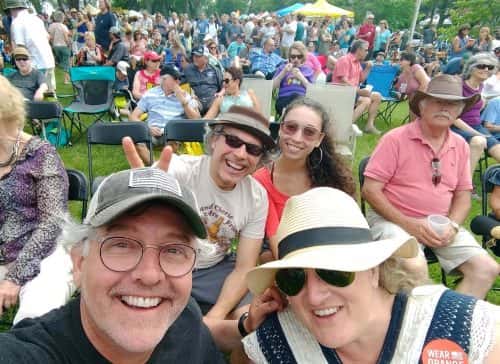 Where do you love to be outdoors in Summer?

The Beach Boys At State Fair