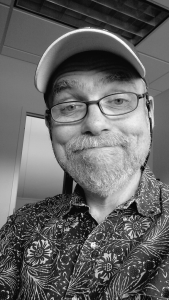 The only thing I ever really wanted to be was a radio DJ. And although I have tried to be other things in my adult life, a radio DJ is still the thing I most want to be.

I was raised on a dairy farm near Monroe, and I went to college at UW-Platteville. After graduation, I worked at several different radio stations in Iowa and Illinois. In the middle of the 1990s, I went back to college at the University of Iowa with the intention of getting out of radio and becoming a social studies teacher. But on the way to my first teaching job, I was intercepted by an educational publishing company in Iowa City, and I became a full-time writer instead. I have worked as a writer and editor, both on some company’s payroll and as a freelancer, ever since. In 2000, a corporate education job brought us to Madison.

At one point in the late 90s and early 00s, I went nine years without doing a radio show. In 2006, I got a job working for Mid-West Family Broadcasting on 93.1 the Lake, a station that no longer exists, but remains much beloved by those of us who remember it. In 2008, I started working for Magic 98, and if you are able to read this bio on Magic’s website, I apparently still do.

My wife Ann and I have no kids, two cats, eight nephews, three nieces, and Badger football season tickets. We are also craft-beer geeks, so if you see us at the bar, say hello.

For most of the last three weeks, I have been in the Indianapolis area working another job I have, so I haven’t been on your radio (and thank you for noticing, if you did). I have not

In 1983, I applied for a job at a new radio station in Madison called Magic 98. I didn’t get the gig—not until 2008, anyway—but one guy who joined up that year was Pat O’Neill. Since then,

It was the summer that Mount St. Helens blew its top, CNN went on the air, Richard Pryor set fire to himself, draft registration was reinstated, Ronald Reagan flirted with naming Gerald Ford as his running mate,

I have written before that my wife and I are beer tourists. We’ll take off on a weekend day and visit breweries, new ones and familiar ones, in Madison and elsewhere. Recently we’ve visited two that made

You may not have heard about the recent death of Don Bustany. You may not recognize his name at all—even though he’s mentioned on Magic 98 every weekend. Don Bustany was the co-creator of American Top 40

Thirty-five years ago this month, Ann and I honeymooned in Chicago, back when we were young and broke. For our anniversary, no longer young and no longer broke, we decided we’d go back for a weekend. We

I have written a few times over the years about another job I have, which is to teach classes for high school kids getting ready to take their ACTs and SATs. I spent most of March doing

Forty years ago this week, Journey, then an up-and-coming rock band, was set to play the Orpheum Theater. Also on the bill was the band Montrose, and a new band from Los Angeles called Van Halen. One

Last weekend, the American Top 40 show on Sunday at the 80s was from February 1984. It gave me flashbacks to a time when I was a far younger man, a time that was pretty awful for