Are you allowed to eat at your desk in your office?  Here at Magic 98, we are.  I joked the other day that over the course of my career, I have eaten exactly one million sandwiches in studios while I’m on the air.  The true number is probably something less than that, but it’s close.
In recent years, it’s been a lot of subs.  Before that, it was fast-food burgers (back when I still ate those).  I recall having Chinese a couple of times, although a meal like that poses a couple of problems.  First, anything requiring utensils raises the degree of difficulty because you need to bring utensils.  And second, anything hot tends to get cold, because it’s the nature of the studio meal to be eaten a bite here and a bite there over a lengthy period of time.  There is no radio station on Earth that has never had pizza delivered to it, but pizza is problematical for studio dining—greasy fingers and studio equipment don’t mix.
Neither do beverages and studio equipment.  Coffee was once ubiquitous in radio studios—no DJ would hit the air without a cup in one hand and headphones in the other.  This also meant a risk of beverages being dumped into sensitive equipment.  I have never done this myself, although I’ve heard stories.  A beverage accident prompted one station I worked for to ban all beverages from the studios.  Memos were sent and signs were hung.  I complied, begrudgingly, for one long, miserable, decaffeinated night shift—only to discover that members of the station’s highly paid morning team were exempt from the rule.  I decided I wasn’t going to be treated any differently than they were, so I ignored the rule from that point on.  So did everybody else, and pretty soon the rule was forgotten.
When I was a little baby disc jockey many years ago, smoking was permitted in station buildings, even in the studios, and cigarettes were as ubiquitous as coffee.  At one place I worked, the back hallway between the studios and the newsroom was designated as a smoking area.  I always wondered how our chain-smoking news director failed to set the building on fire, given the way she’d flick butts into wastepaper baskets full of discarded wire copy.
A radio studio is a place with many faces: it’s a stage for performers, a refuge for the maladjusted, a garden of delight for those who love what they do.  And sometimes, it’s a dining room.

Where Did the Year Go? 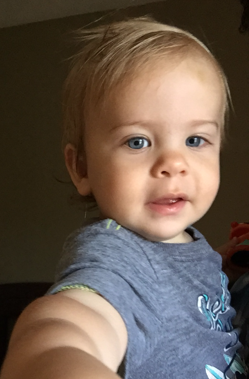