So . . . it happened.  The Her Madison 5K was last weekend, and without a ton of training, I was happy to be reminded that my body could still run 3.1 miles pretty easily. I was honestly pretty worried. My running has been practically non-existent since becoming a mom, and the last thing I wanted to do was fail at a distance I never used to even bat an eye at.

I was so impressed by every single woman who came out to run, not just for running, but also for figuring out time to train beforehand. I don’t think I’m alone when Iput most of my needs and wants way down on the list—so far that most of the time, when everyone else has been taken care of, my things don’t happen. It has gotten easier as the kids have gotten older, but now the chaos is for different reasons. What used to be last-minute diaper changes and unexpected naps has now become soccer camp, music class and T-ball practice.

My husband, Marc, brought the boys down to see me off before the race, and they were there waiting for me afterwards, too. (Let’s be honest, though: they were much more excited that the Culver’s ice-cream cone mascot dude was there handing out tokens for a free scoop. But still, they were there.)

My girlfriend, Krista, ran with me, and she gave me one of the most thoughtful gifts I have ever received: a Fellow Flower to wear in honor of the grit it takes to get there. You will love Fellow Flowers. Get yourself one and send one to someone you love, too.

Here’s to bringin’ it every dang day!  Cheers, sisters!!

Franny Is This Week’s Kid

2017 Concerts on the Square Pictures 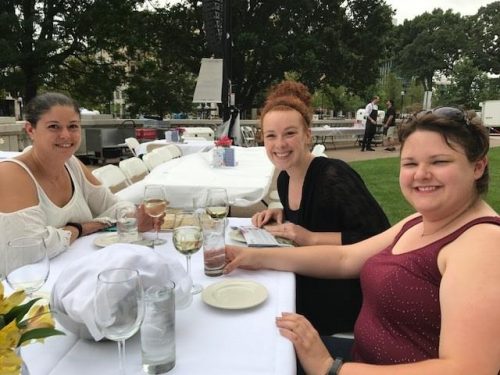