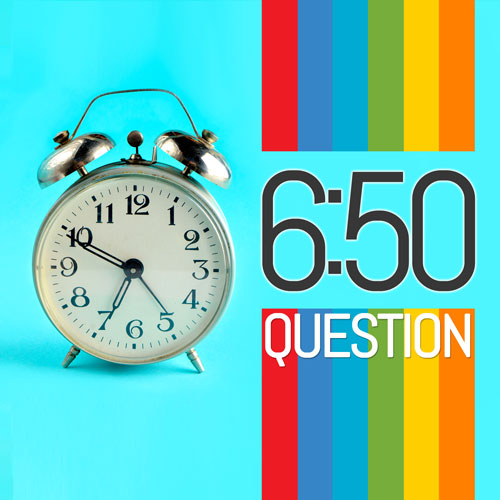 Fletch and Lanette present the 6:50 Question each weekday morning. The first caller at on the Magic Line at (608)321-0098 with the correct answer wins. You can win once every 30 days and must be 18 or older.

Here are some previous questions and answers

Here’s a mystery voice- who is it?

Listen carefully to Voice 1. It’s his birthday today. Who is he?

School’s out, bring on Summer. Here’s a Summer Triple Snippet – three songs, all with Summer in their titles. Name all three songs.

Here are three quotes from a famous person… who is it? “Show me a good loser, and I’ll show you a loser.”, “Winning isn’t everything, it’s the only thing.”, “Winning is habit. Unfortunately, so is losing.”

Vince Lombardi (today would have been his birthday — 107)

It’s National Herbs and Spices Day, so let’s play Herbs or spice… tell us which is an herb, which is a spice?

If we tell you that we are “Rocking the Baby,” “Walking the Dog,” and “Grilling the Brats,” what are we doing?

We are doing yo yo tricks, while grilling the brats. Happy National Yo Yo Day!

It’s National Cheese Day! Listen to this commercial clip and tell us what cheese product it’s for…

It’s National Running Day today. Listen carefully as one of the world’s greatest runners is running, being chased by reporters. Who is this famous runner?

Happy birthday to this comedian and actor… who’s seemingly just like the rest of us, trying to look the best we can for those summer tank tops, shorts and swimsuits… she’s much funnier about it than the rest of us though.

Who is this birthday girl?

Today’s the anniversary of a huge hit from 1982. Here’s the band’s the lead singer talking about it. What song is it?

“Eye of the Tiger” by Survivor

Happy birthday today to this singer. She was 19 when that was a hit. Today, she’s 52. Who is she?

Home game playing is way up. We’re going to name three games you could play at home, two are real games, one is not. Which one is not a real game? “Exploding Kittens,” “You’ve Got Crabs,” or “Root Canal?”

One of the things we’ll be missing this weekend is our local Memorial Day Parades… so we thought we’d go to a virtual parade together… what parade is this?  Name the movie.

Here’s an old commercial you probably will remember. What’s the name of the product they’re advertising?

If your fork, your crankset, and your derailleur are all broken, what will you not be doing today?

Riding your bike (to work)… Today is nNational Bike to Work Day.

Lanette will read you a poem about a bird…  What kind of a poem is that?

Here are three songs, all with one theme… a theme that is permeating our lives right now! What is the theme?

One flower, above all others, is the most commonly given, and perhaps the most appropriate to give for Mothers’ Dday.  What flower is it?

The board games have been getting a lot of extra love lately. We’re going to play you three familiar sounds from some of the most popular board games. What games is each of these sounds from?

A third of all people who went to a Superbowl party last night are calling in sick to work today. Hard as it is to believe, today is NOT the biggest call-in-sick day of the year. What day is bigger?

“Wicked” opens at Overture Center tonight (3/11). Listen to this clip of John Travolta, bungling the name of one of the stars from the original Broadway cast, at the Oscars in 2014. Your question is, what is her real name? (clip)

Today, a mystery voice. Who is this?

Based on this misheard lyric-that is, this is not quite the right lyric-what is the song’s title?

It’s restaurant week in Madison all this week. So here’s one of the most famous restaurant scenes from the movies… what are the names of the two actors? (clip)

Meg Ryan and Billy Crystal (from “When Harry Met Sally”).

Which of the following was not a Ben Franklin invention? The Swim Fin, Bifocals, or the fire extinguisher?

Happy birthday to this dreamy guy…(CLIP)

Lanette Sings In the Shower… with a preview of “98 Hours of Christmas Magic.” What Christmas song is Lanette singing in the shower?

BabyNames.com released this week, the most popular baby names of 2019. Name one boy and one girl name in the top five.

Here are clips of three of our favorite “abusurdists” (for National Absurdity Day) – who are they? (clip)

Apparently, not everybody is a big fan of Cher, including one huge celebrity, whose voice you’re about to hear. Who is this big celebrity, talking about how she doesn’t really like Cher?

All three of these songs include the word “dream.” What are the full titles of all three songs? (clip)

“These Dreams” by Heart, “Shattered Dreams” by Johnny Hates Jazz, “Get Outta My Car, Get Into My Dreams” by Billy Ocean

Each of these three celebs is a US military vet- can you name them? (clip)

Dane County airport just announced five new direct-flight destinations. So, soon, you’ll be able to fly direct from Madison to Boston, Nashville, Portland, Seattle and Newark. Of those five new destinations, which is the biggest city, which is the smallest?

From one of the greatest Halloween shows ever, this clip is from “It’s The Great Pumpkin, Charlie Brown”. Tell us which of the Charlie Brown characters is uttering this wisdom…

Within two inches, what’s the biggest 1-day snowfall total ever for Madison?

The center named for Aldo Leopold, a famous Wisconsin… what? Was he a Naturist, a Nutritionist, or a Naturalist?

He was a Naturalist (a naturist is a nudist, which he might have been, but we have no knowledge of that!)