New Playground … At Least for Us 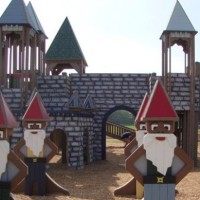 My husband stumbled across an awesome playground in Cottage Grove.  It’s the Phoebe Bulman Bakken Memorial Park … and this place is cool.  There’s lots of great climbing and running and sliding and swinging.  And it got extra cool when I found out that it was a park built just a few years ago solely on donor money and volunteers to actually put it all together.

You always hope your kid will get along with and be accepted by other kids, so I was just a beaming momma when Everett ran up to a boy and a girl and said, “Hey guys!  Look at me!”  The little girl said, “Wanna play tag?”  Now whether Everett truly knows what tag is or not, he lept up and screamed enthusiastically, “YEAH!”  And off they went playing tag and running around.  When he decided the big, covered slide was too big, this sweet new friend said, “That’s okay, we can come over here to the smaller one.”  I wanted to scoop up this brother and sister, who we later found out were named Emma and Devin, and give them big, huge hugs.  Then they all decided it was time to swing.  Everett and Devin sang the Thomas the Train theme song together while Marc and I tried to keep up and push all three of them on the swings.

It was a great morning for so many reasons:  Everett was a sweaty, hungry mess – so we got home, ate lunch and he crashed for a couple hours.  And also because I got to see what great kids are capable of.  These two kids didn’t have to play with Everett, but they did and with such sweetness that I can only hope that this will be the kind of people that Everett will befriend along his way in life.

Thank you to the parents, too … job well done!

The Winning Is Just Beginning